Army National Guard answers the call, at home or abroad. The incredible versatility of the Army National Guard enables its troops to respond to domestic emergencies, combat missions, counterdrug efforts, reconstruction missions and more – all with equal speed, strength and efficiency.

Army ROTC
Are you a leader? The Army ROTC may be for you.

Travel Discounts
Take advantage of your Army National Guard benefits while traveling, and enjoy the savings.

Relocation / PCS
Frequent relocations are an accepted part of Army National Guard life. Moving is challenging and can be disruptive and stressful to DoD personnel and their families.

Requirements To Join
Are you in excellent physical and mental condition? It is a must if you want to be a soldier in the U.S. Army National Guard!

Changing Jobs
Moving to a different Military Occupation Specialty, Air Force Specialty or Rating is not the only way to change Army National Guard jobs. 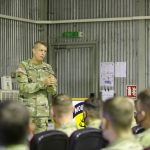 Guard Chief Details Changes to Combat Assault, Harassment - JANUARY 21, 2022 – The National Guard is instituting changes to better combat assault and harassment in the ranks, Army Gen. Daniel Hokanson told the House Armed Services military personnel subcommittee yesterday. Hokanson, the chief of the National Guard Bureau and a member of the Joint Chiefs of Staff, told the subcommittee that the Guard […]
More News

Army National Guard Discounts
Information and links about discounts and deals for members of the U.S. Armed Services and U.S. Military veterans including vacation destinations.

Army National Guard Spouses
Know your benefits as the spouse or family member of a military servicemember or veteran.